Sign in
Nearly two-thirds of consumers worldwide say they'd like the ability to message with brands, according to LivePerson's Consumer Preferences for Conversational Commerce survey
Survey examines consumer preferences around brand interactions; 90% of consumers are more likely to do business with companies that can answer questions immediately

NEW YORK, Oct. 17, 2019 /PRNewswire/ -- LivePerson, Inc. (Nasdaq: LPSN), a global leader in conversational commerce solutions, today announced the findings of its Consumer Preferences for Conversational Commerce survey examining consumer attitudes and preferences around brand interactions, messaging, and chatbots. The survey of more than 5,000 adults in six countries found that messaging and chatbots are becoming widely used, with nearly two-thirds of consumers worldwide saying they'd like the ability to message with brands. What's more, the survey showed that as consumer interest in messaging increases, brands need to pay greater attention to conversational design — the ability to evaluate and optimize conversations — to meet customer expectations.

The August 2019 survey included respondents from the United States, United Kingdom, France, Germany, Japan, and Australia. Among Americans, interest in using messaging to interact with brands rose significantly, from 52% in 2018 to 62% this year. The European countries surveyed had the highest average demand for messaging, at 65% of respondents. Perhaps not surprisingly, this capability is of most interest to younger demographics, with more than 70% of people 18-34 years old wanting the option to message with businesses.

Consumer messaging capabilities can take many forms, including the native messaging apps of iOS and Android, messaging platforms like WhatsApp and Facebook Messenger, voice assistants such as Alexa, and even branded mobile apps and websites.

The survey also looked at the ways consumers are using chatbots and messaging to interact with brands and their attitudes toward those experiences. Key findings are summarized below:

On doing business with brands

The convenience of messaging is shifting consumer preferences.

If a company has gathered information about you in a secure manner, would you feel comfortable using a chatbot that does the following things: 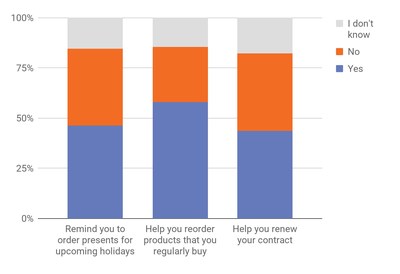 On humans versus bots

Human representatives are still the default preference for certain situations, but an appetite for bots is growing (especially among younger consumers).

On chatbot and messaging experiences

There's still room for improvement when it comes to user experience.

"The Consumer Preferences for Conversational Commerce survey shows that consumers — particularly younger consumers — are increasingly interested in the convenience and ease bots and messaging offer," said Manlio Carrelli, executive vice president, Enterprise Business Group at LivePerson. "That said, there is still a lot of room for improvement when it comes to the experiences consumers are having. Savvy brands should pay attention to conversational design to ensure they are not only offering customers their preferred channels of communication, but that they are also meeting and exceeding customer expectations in those channels."

The LivePerson Consumer Preferences for Conversational Commerce survey was conducted in August 2019 via an online survey of 5,031 consumers age 18 and older in the United States, United Kingdom, France, Germany, Japan, and Australia. Respondents were asked a series of questions on the topics of messaging, chatbots and automation, and how they prefer to communicate with brands. The full report is available to view online.

About LivePerson
LivePerson makes life easier by transforming how people communicate with brands. Our 18,000 customers, including leading brands like HSBC, Orange, GM Financial, and The Home Depot, use our conversational commerce solutions to orchestrate humans and AI, at scale, and create a convenient, deeply personal relationship — a conversational relationship — with their millions of consumers. For more information about LivePerson (NASDAQ: LPSN), please visit www.liveperson.com.